Michele Cossyro Valenza was born in Pantelleria on 16 March 1944. He was a pupil of Pericle Fazzini at the School of Sculpture of the Accademia di Belle Arti in Rome. In the 60s he worked in high fashion and his jewellery was worn by the models of the Luigi Faraoni show in the Sala Bianca of Palazzo Pitti in Florence. In 1969 and 1971, signing his work first Michele Valenza, then Cossyro, he won the 2nd and 4th Italian competition for jewellery artists of Milan Il diamante nell’anello di fidanzamento and Diamanti oggi, sponsored by De Beers Consolidated Mines Ltd.    Since 1978 he has held the chair of Decoration in the Academies of Fine Arts in Catania, Urbino and Venice; since 1987 he has held the chair of Decoration at the Accademia di Belle Arti of L’Aquila, which he directed from 1987 to 1995. He taught Decoration at the Accademia di Belle Arti in Rome until 2011. In 2014 the Accademia di Belle Arti in Rome awarded him the title of: Emeritus Academic  Master.    He was a member of the CIMAE Committee for the Ministry of Foreign Affairs from 1990 to 1995 and is a technical consultant for the Ministry of Finance and the Italian State Mint. Since 1979 he has been the artistic director of La Salerniana in Erice. He lives and works in Rome.   In his initial brief period of training and research, the artist explored a personal approach to abstraction, with vaguely Surrealfantastic references. A constant presence in paintings and sculptures from this period are light and steep planes hanging in the balance, expressing unease and social-ecological themes. The attention given to the ecology and culture ofthe Mediterranean, which has always been present in his work, is expressed and focused in the work of the seventies. It is for him that criticism invented the concept of Phenomenal abstraction, to explain his original research often expressed through Metaphor. The 1970s saw: metaphors of the sea, vertical stripes, hooks, hulls, corks, feathers, object works, settings, defragmentation, disseminations and installations, which he showed in the Galleria Cortina in Milan and in the Galleria Artivisive in Rome. Towards the end of the 70s, and for all of the 80s, always reflecting on space and the environment, Michele Cossyro further explored abstraction, always starting with Mediterranean emotions, memories and suggestions. In the early eighties he was among the founders of Narciso Art, theorized by Giorgio Di Genova, and produced the series of corner paintings, in fact called ‘Narciso’. In this series he develops the idea of The madness of painting, like Narcissus, looking at himself and going mad. In these mirrored paintings and painted mirrors, painted parts alternate with mirror sections. They are also aniconic works, in which phenomenal abstraction is joined by new decompositions, defragmentations and tricks of perception. He continues along these lines until the late 80s, when his exploration of these themes culminates in the series: ‘Derivazioni stellari’ on show in the Galleria dei Banchi Nuovi in Rome. Starting in 1989, he started work on the ‘Nasse’ (lobster pot) series, which continued throughout the 90s. The ‘Nasse’ are two-dimensional works, known as Pictosculptures, making use of the metaphors of the net, cage, capture, deception, and globalization. Also in the 90s he dedicates himself to public commissions, and produces many large works of sculpture and mosaics throughout Italy. It is in fact to this period that the large works of sculpture, mosaics, stained glass, and ceramics are commissioned for public and private spaces and buildings. Since 2000, his artistic production has been directed mainly on sculpture, never forgotten, with the addition of two-dimensional signs. In the last decade Michele Cossyro has used bronze and ceramics, with wall installations and placements that make Sculpture the accomplice of signs. The sculptural object placed on the wall interacts with the sign – a line drawing on the wall – and between the sculptural work and the sign, a new dialogue is established. The sculptural object and the sign, like a sinopite, makes the work lose its fixity and become an open work in progress according to the transformation of the sign. These two inseparable elements, line and sculpture, are at the basis of his work in recent years, and include Metafore del Viaggio, Echi dal fondo, Abissi, and Interspazio. The works of Michele Cossyro are present in Italian and foreign museums, in public and private collections. Information on Cossyro’s work has been published from 1973 to the present, in all the catalogues of Painting and Sculpture published by Bolaffi and Mondadori e Associati. In Bolaffi he has been reviewed by the following critics: C. Munari (1975), G. Di Genova (1980) and P. Bucarelli (1982). 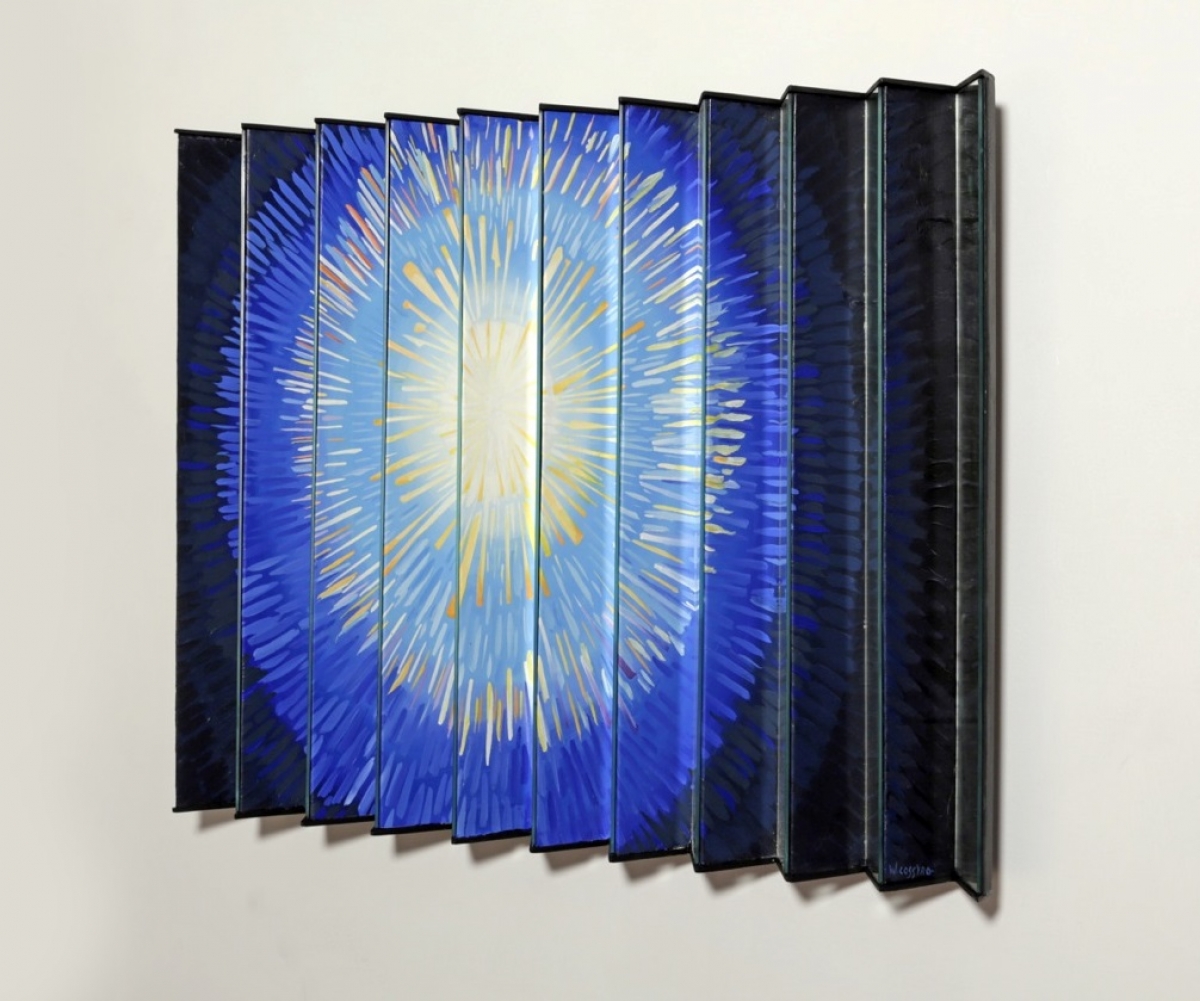